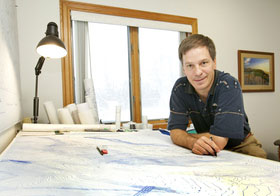 
Doak and his Renaissance Golf Design team will design and build a reversible course – two distinct layouts using the same greens but playing clockwise one way and counter clockwise the other way.


“This is a concept I have thought about for 30 years,” Doak said. “You need the right site and the right client to understand the appeal of it. At Forest Dunes we finally have both.”


Doak said when he first met Forest Dunes’ owner, Lew Thompson, an Arkansas-based trucking magnate, Thompson said he wanted a new course but it had to “wow” him.


Thompson wanted a second course that would keep golfers staying on the property an extra night or two after they had played the club’s Tom Weiskopf course, already ranked by national magazines in the Top 100 best courses in America.


The double dose of Doak should accomplish both of those goals.


“The appeal of a reversible course is people would want to play it both ways. You are getting two golf courses in one,” Doak said.


Thompson is the managing member of a partnership that owns and operates The Bridges, a Jack Nicklaus course in Montrose, on Colorado’s Western Slope, halfway between Grand Junction and Telluride.


He said with the tough competition from the great number of very good golf courses in northern Michigan
he wanted a course that would stand out.


“I told Tom when I first met him that if it’s just another golf course, it’s not going to do me or Forest Dunes any good,” Thompson said. “If you can wow me then we can build it. He wowed me.”


Doak said the Forest Dunes site is perfect for the double dip course because the land has small undulations and is not hilly.


“It is not a super dramatic site, but that’s better for this concept,” he said. “If you were playing over ravines in one direction, you’d probably have to play blindly out of them the other way around. You can’t have woods behind the green,
or you’d have to play over the trees from the other direction.”


Doak said the most difficult part of designing the reversible course is thinking about the greens.


"They have to work from both directions,” he said. “You can’t have severe greens.”


Crowned greens or ones that fall away can work, as can tiered greens that go side to side, he said.


“You just have to think about all of it at the same time,” Doak said, joking about the headaches such concentration could trigger.


Doak said the idea of reversible course is not as revolutionary as it sounds. Many Scottish links, including The Old Course at St. Andrews, were played in reverse in winter to spread out the wear and tear of divots. Architects including Tom Simpson and Alister MacKenzie designed private estate courses with a handful of reversible holes. But, as far as Doak is aware, there is no 18-hole course in the world today that is played in reverse on a regular basis.


Doak said he plans to begin shaping holes in late September and depending on weather he expects to have three to six holes ready for irrigation before the snow flies.


“We are just tickled to have the chance to work close to home and to do something special,” he said.


Thompson believes the reversible course will be the ultimate feather in Doak’s distinguished architectural cap.


“I think Tom will be very hands on with this course,” he said. “This is a huge deal for Tom and it’s a win for him and for Forest Dunes.”


Doak’s last northern Michigan design is the Black Forest course at the Wilderness Valley Golf Club in Gaylord that opened in 1992. He also designed the Lost Dunes course in Bridgman before going on to designing 31 courses around the globe, including five that are recognized in the Top 100 courses in the world.


Nestled on 1,300 acres of heavily wooded land within the Huron National Forest, Forest Dunes has become one of the country's premier golf experiences. In this pristine setting, 1973 British Open Champion Tom Weiskopf designed one of his top layouts featuring rugged native dunes, scruffy sand areas and water features. The course is consistently ranked among the best courses by the leading golf publications. Golf Digest ranks it No. 23 among the top public courses, GOLF Magazine has it No. 72 in the Top 100 and Golfweek lists it No. 97 on its modern list. Matt Ginella of Golf Channel’s Morning Drive also ranks it 10th among his favorite public courses.


In addition to the award winning Forest Dunes course, the property features the beautiful Adirondack style Lake AuSable Lodge with 14-rooms and six lakeside cottages, as well as Sangomore’s restaurant.